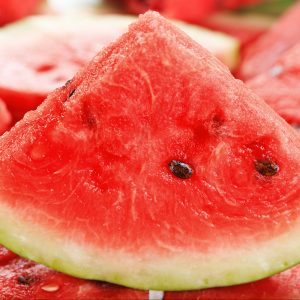 Watermelon is the quintessential summer fruit. It’s the fruit you love to see sliced up and gleaming at a barbecue. It’s the fruit staining a thousand family reunion shirts. It’s the fruit that strikes the perfect balance between satisfying your hunger and your heart.

You might’ve thought that it’s all water and sugar, but then you might’ve been wrong. You’ve been underestimating watermelon’s nutrient density all your life, though you may not have known it.

Next time you’re at a party and want to impress everyone around you, here’s what you do. Stand near the fruit plate and tell people that the scientific name for watermelon is Citrullus Lanatus. Some smart aleck who knows Latin will probably inform you that Lanatus is the word for “hairy” in Latin, and therefore could not describe the smooth, hairless watermelon. Then you can be an even smarter aleck. Inform them that the fruit inherited “lanatus” in 1930 when a scientist mistook the watermelon we know and love for the bitter and fuzzy citron melon, also named Citrullus Lanatus.

Many years after this case of mistaken identity was made, scientists decided to keep the name, even though it didn’t describe the watermelon at all. Add Citrullus Lanatus to the list of mistakes we inherited from old dudes throughout history, along with the term “American Indians,” and racism.

Watermelon is my personal favorite member of the Cucurbitaceae family, which is also known as the gourd family. The family also includes squash, pumpkin, zucchini, and cucumber, which makes it one of the most storied botanical families in human history.

Why Is A Watermelon Red?

If I had to describe a watermelon to an alien who had just walked off its interstellar ship, I would say it’s got a smooth rind and a sweet, red, watery flesh at its center, much like people. The appealing ruby red or pink interior of the watermelon doesn’t happen by accident. Unlike people, lycopene – a natural pigment – produces the reddish color of their insides. 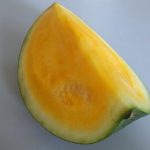 There are watermelon varieties in which the lycopene component isn’t so high. The lycopene-less varieties of watermelon might taste just a little less sweet however. This is because the gene for the color red is paired with the gene that determines the sugar content. So if you see a white, yellow, or orange colored watermelon, don’t panic!

Watermelons produced for commercial consumption naturally have seeds, as any fruit might, but it is possible to produce a seedless watermelon through mild chemical treatment of the plants.

Colchicine is harmless in small doses. Large doses will only leave you with an upset stomach, at worst. If you really love your seedless watermelons, you shouldn’t worry too much about it. Colchicine is only applied to parent plants, not their seeds. This applications causes the fruit from the resulting offspring to have the ‘seedless’ white and thin seeds versus the traditional black seeds.

There are many organic approved processes to achieve seedless watermelons. In my opinion though, the seeds are part of the complete watermelon experience. Besides, I’d rather have some seeds left over to roast, as the Chinese often do.

First things first, it’s in the name. Water. It’s 92 percent water, 6 percent sugar, and 2 percent mystery. (Actually the 2 percent is mostly other stuff I’ll give you information on in the following sections. ) That water will provide a quick boost of hydration, and if you eat it at a cookout, the sugar will give you the energy to outrun your cousin in that family tag football game. The same rings true for watermelon juice.

According to the American Journal of Hypertension, supplementing the body with watermelon extract could arrest burgeoning blood pressure levels in obese middle aged adults.  This is due to the citrulline component found in watermelons. Citrulline improves blood flow by relaxing the blood vessels (scientifically known as vasodilation). In addition, studies show that the lycopene helps reduce cholesterol and heart disease in those who eat lycopene rich foods regularly.

Your kidneys convert some of the citrulline in watermelons into another amino acid, arginine, which is honestly great of kidneys to do without us even having to ask. Both citrulline and arginine have benefits for people who have bodies, like you. 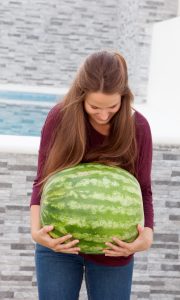 Citrulline helps accelerate the process by which your body removes lactic acid, which builds up after a tough workout. So next time somebody at the gym gives you a dirty look for slicing up a watermelon in the locker room, you have something to tell them.

While we’re on the topic, if you’re working out, a watermelon also might be useful as a natural weight, because it weighs a bunch. I have conducted several studies at the grocery store which support this.

Arginine, the amino acid kidneys produce when they encounter citrulline, also protects against diabetes. Studies show that this amino acid helps regulate glucose metabolism and sensitivity to insulin. This means watermelon could be a beneficial part of a diet designed to fight diabetes, because the 92 percent water and roughage content offsets the 6 percent sugar content.

This delicious treat that melts in your mouth satisfies the constant cravings that a diabetic diet might impose, as well as just tasting damn good otherwise.

Choline rounds out the group of beneficial components found in watermelon. It plays a key role in sleep regulation, memory, learning and muscle movement. If you’re interested in maintaining the structural integrity of your cells, boy do I have news for you. Choline maintains structural integrity of cells, a factor that’s of great significance in checking inflammation.

Watermelon contains substantial quantities of vitamin A and vitamin C. Vitamin A improves health of hair follicles by naturally moisturizing them, leaving them with a sleek and shine to rival Garnier. Similarly, human bodies need vitamin C to produce skin and hair, because it aids in the production of collagen.

If you’re a pirate in the eighteenth century or a college student who has only eaten instant noodles for the past year, it also prevents scurvy. The Vitamins and the hydration you get from this sweet melon can help you get that easy, breezy, beautiful skin and hair that might lead your friends to ask if you’ve got work done. And if they do, all you have to say to them is that you’ve been eating watermelon.