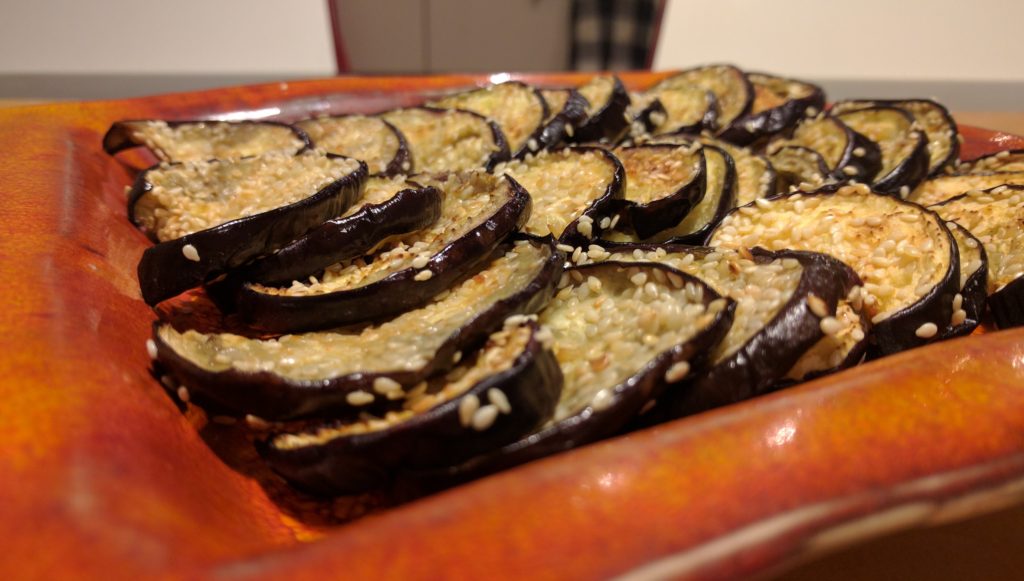 This super simple eggplant with sesame seeds dish is one of my favorites and nicely complements a simple dinner bowl.

But that’s not the only way you can enjoy it. It also works well as a snack on a party table (even if the party is only for me and may or may not mean binge watching the last season of Modern Family…).

These eggplant slices go nicely together with hummus, yogurt sauce, and falafel. Alternatively, you can also put them on a bed of sticky rice with spicy stir-fried bok choi and sautéed mushrooms.

The slices taste the best warm just out of the oven, but I  sometimes eat the leftovers for breakfast the next day. They are great even then. So what are you waiting for – start cooking! Prepare to delight your taste buds.

Eggplant is botanically a berry and belongs to the nightshades family. It’s originally from India but today it’s widely grown and used in the Middle East, the Mediterranean, and all over Asia.

It has many varieties and various shapes. There are long thin ones and small round ones and everything in between. The colors also vary from white to yellow to green to the well- known dark purple.

Raw eggplant mostly consists of water (92%), has 6% carbohydrates, 1% protein and almost no fat. From micro-nutrients, 100 g of eggplant contains 11% of the daily value of manganese.

As said the eggplant is low on calories, but it absorbs liquids and oil very well so this should be kept in mind while cooking it. 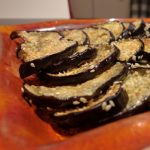 In this recipe, it is important to really brush the slices with olive oil mixture, not toss them all in a bowl with the marinade. The eggplant absorbs all liquids really fast so in this case taking extra time to lightly brush the slices pays off You can play around with white and black sesame seeds to make the dish more fun!