In the kingdom of fruits and veggies, vivid color is a symbol of health. Purple is no exception! There is nothing like the sight of blueberries, so rich in color and pleasing to the palette. It’s enough to make your mouth water with anticipation. But not only that, the benefits of blueberries are amazing from a nutritional standpoint.

Plus, for true organic pleasures, there is nothing like picking your own wild blueberries in season and eating them right then and there, while saving some for later. From picking them to making wonderful treats to watching children’s faces and fingers turn purplish-blue with the color of pure joy, you can’t go wrong with these natural delights.

Fun Fact:  In Quebec, there is quite a tradition among blueberry Pickers when these powerful little berries are ready to eat! Large-scale harvesting of wild fruit continues in areas where logging or burning has recently occurred. The Pickers sleep in the forest, under a tent or in temporary shelters. Often, entire families engage in this activity for a whole month.

Blueberries, the New Fountain of Youth

A blueberry skin’s blue pigmentation contains a high concentration of anthocyanins, an antioxidant that has the ability to destroy free radicals in the body. In large numbers, free radicals are responsible for many diseases, including cancer. In addition, blueberries appear to contain powerful anti-inflammatory compounds.

A study carried out at the University of Manchester (and published in the Archives of Toxicology) found that consuming purple fruits can help fight age-related diseases. Regular consumption of blueberries, blackberries, blackcurrants or plums reduces your chances of developing multiple sclerosis, Alzheimer’s and Parkinson’s disease.

A cup (250 ml) of fresh blueberries is only 87 calories, making it a slimming delicacy. The same portion meets one quarter of your daily requirement for vitamin C, which plays a vital role in the development and health of bones, cartilage, teeth and gums.

Blueberries also contain lots of fiber: four grams per cup (250 ml), meeting 16 percent of adults’ daily needs. Fiber is essential for promoting good digestive regularity. It is recommended that children between the ages of four and eight consume 25 grams of fiber every day. Adult females (19-50 years old) should also consume 25 grams daily, and males (19-50 years) should have 38 grams daily. 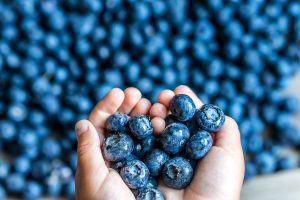 Whether wild or cultivated, fresh, frozen or in juice, these beautiful blue fruits are particularly rich in antioxididants.  In fact, blueberries have one of the highest antioxidants concentrations known. This makes them an excellent anticarcinogen.

Blueberry extract is thought to be most potent in inhibiting the growth of leukemic and colon cancer cells. Blueberry and blueberry flavonoids may also play a protective role against some cancers, even acting on genes by preventing the generation of certain cancer mutations.

As observed in studies, wild blueberry, raspberry and cranberry juices are thought to inhibit the growth of human cancer cells (stomach, prostate, intestine and breast). Blueberry extracts may also have a preventive effect against breast cancer by decreasing the proliferation of cancer cells and the incidence of tumors. Although these studies were conducted in vitro, the doses of blueberry extract used represents realistic servings for humans (approximately 120 grams / 185 milliliters (¾ cup) fresh blueberries each day for a 60 kilogram person).

The benefits of blueberries are numerous.

The scientists at Michigan Cardiovascular Center have shown that rats fed freeze-dried blueberry powder and kept on a diet of either high or low fat have less abdominal fat, less triglycerides (fatty acids in the blood) and less cholesterol than rats that do not receive blueberry powder. Researchers found that blueberry ingestion affected genes associated with fat burning and storage.

A study by the American Journal of Clinical Nutrition has shown that anthocyanins (the purple pigments found in blueberries) protect against hypertension. Over a 14-year research period, the scientists examined approximately 134,000 women and 23,000 men. Those who ate more than 125 milliliters (½ cup) of blueberries every week reduced their risk of developing high blood pressure by 10 percent compared with those who did not.

Anthocyanins have also been associated with an increase in the signals emitted by neurons in the brain center. A small study at the University of Cincinnati Academic Health Center examined the effects of daily consumption of wild blueberry juice on older adults who had complaints about memory loss. Twelve weeks later, participants had seen an improvement in their memory function.

The results of a study published in 2010 in the journal Carcinogenesis showed that pterostilbene (a compound found in blueberries) may provide protection against colon cancer, which is the second leading cause of death for Canadians (after lung cancer). Researchers at Rutgers University in New Jersey have shown the ability of pterostilbene to suppress the development of tumors in the colon, as well as major inflammatory markers.

A Champion Of Antioxidants 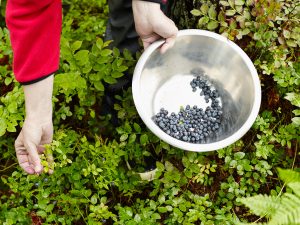 Flavonoids are the most potent antioxidants in blueberry and are involved in the neutralization of free radicals in the body. In vitro, blueberry flavonoids have been shown to protect against oxidation and inflammation of blood vessels.

Among the most important flavonoids in blueberry are proanthocyanins and anthocyanins, the content of which increases ripening. Blueberries also contain catechins, a variety of phenolic acid, with an antioxidant effect.

Clinical and epidemiological studies indicate that the consumption of flavonoids in foods and beverages may decrease the chances of getting atherosclerosis (a risk factor for cardiovascular diseases). Blueberry phenolics are thought to slow the onset of cardiovascular disease by reducing: the oxidation of blood lipids, the effects of oxidative stress (leading to cell death) and inflammation of the vascular system.

The addition of blueberries to a plant-rich diet lowered cholesterol levels in animals. According to the researchers, blueberries act in synergy with plants like soybeans, oats and barley and improve your blood lipid profile. No studies have demonstrated such an effect in humans to date, but the authors suggest that with equivalent doses of about 500 milliliters (2 cups) every day, the observed effects could occur.

Studies at the University of Montreal have shown that fermented wild blueberry juice has anti-diabetic properties. This juice protects against the development of diabetes or glucose intolerance. It also helps prevent hyperglycemia in diabetic mice and the development of diabetes and obesity in pre-diabetic mice. Another study concluded that blueberry powder added to a high fat diet provides protection against insulin resistance and hyperglycemia.

Blueberries may have an effect on balance and coordination disorders, but also provide antioxidant and anti-inflammatory protection. Fermented blueberry juice could help prevent neurodegenerative diseases by protecting neurons from oxidative stress.

Blueberries could help decrease the progression of Alzheimer’s disease or Parkinson’s disease. Studies in humans and animals have shown that eating blueberry juice improves memory-related tasks [22, 24]. The addition of blueberry extracts to an animal’s diet also prevents the decline of cognitive functions and could even improve them.

An in vitro study demonstrated that a specific fraction of blueberry flavonoids could preveblnt Escherichia Coli bacteria (the cause of urinary tract infections) from adhering to the walls of the urinary canal. However, no clinical studies have confirmed the effect of actual blueberry consumption on the prevention of urinary infection 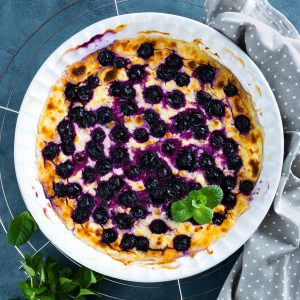 Children love to eat with their hands, and as a result, blueberries are eaten like little sweets. Children also enjoy picking berries. If mother nature is gentle, wild blueberry picking begins in the first week of August and lasts about four weeks. When you get home, take the opportunity to stock your freezer and cook some delicious recipes.

Here are some ideas to brighten up the family menu:

Enjoy delicious blueberries any way you choose.  Share with us how you incorporate blueberries into your organic lifestyle.