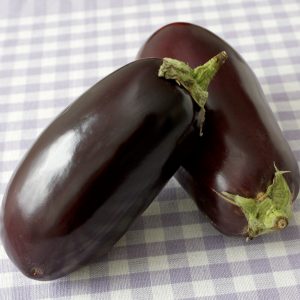 The boldly colored eggplant is a humble plant.  It is often overlooked in the produce aisles at the supermarket – until one recognizes there are so many eggplant health benefits.  The rich, purple color of the most common variety certainly catches the eye.

The eggplant is a firm, fibrous plant with a cream-colored, spongy flesh. It is used in a variety of popular dishes such as Eggplant Parmesan and Ratatouille, a flavorful vegetable stew originating in the French countryside.

This tear-drop shaped fruit (not a vegetable) belongs to the nightshade family of plants, the most common of which are white potatoes, tomatoes, bell peppers, cayenne and paprika.

Growing up in a large family, my mom was not the experimental type.  She was the thrifty type who served her family a basic diet of the most economical meats and vegetables.  While eggplant is affordable, I was not introduced to it until I began cooking for myself and seeking fruits and vegetables for their nutritional value.

I first prepared a grilled version of the classic French dish Ratatouille which the entire family enjoyed.  I also attempted roasting it and steaming it.

Roasting seems to be the preferred method.  The spongy flesh retains some of its firmness and simple seasonings bring out its nutty flavor.  Steaming the eggplant led to watery, mushy flesh and very little taste.

My experimentation proved that, when prepared correctly, eggplant adds great taste and versatility to dishes. And with it, you get the full scope of eggplant health benefits.

A Brief Eggplant History And Tidbits

Eggplant grew wild in India and was first cultivated in China in approximately the 5th Century B.C.  It made its way to Africa and then found a home in Italy in the 14th Century where it became more widely consumed.  Due to the bitter taste of the early strains of eggplant, it did not increase in popularity until new strains were cultivated and it was brought to the United States in the 1800s.

Italy, Egypt, Turkey, China and Japan are the leading producers of eggplant in the world today.  They grow in a manner similar to that of tomatoes, by hanging from the vines of the plant that grows stalks several feet tall.  The common variety of the plant itself, with its glossy, purple fruit, is an ornamental beauty.

Eggplant Health Benefits – What is Eggplant Good For?

Eggplant contains a variety of vitamins and minerals, including large amounts of fiber, folate, potassium and manganese.  It is widely used in the popular Mediterranean Diet, a diet that focuses on plant-based, nutrient-rich foods for heart health.

Studies have indicated it is beneficial for treating stomach discomfort, inflammation, coughs, asthma and many other ailments.  Beyond these, eggplant provides a wide range of other health benefits.

Another one of the eggplant health benefits is that the skin of the eggplant contains Nasunin, a phytonutrient effective in fighting free radicals in the blood vessels that cause cancer. Nasunin also protects the fatty membranes of brain cells from damage.

The rich fiber content in eggplant absorbs toxins and chemicals that could lead to cell damage and cancer as it moves through the body’s digestive tract. Those wanting to reduce their risk of developing cancer, especially colon cancer, should include the skin of the eggplant in their diet.

Eggplant contains fiber, potassium, Vitamin C and B6.  These nutrients often lower blood pressure and reduce the risk of coronary disease.  In fact, studies show that eating eggplant and foods rich in these nutrients lowers one’s chances of developing heart disease by as much as 34 percent.

Studies have shown that consuming eggplant juice lowers cholesterol levels in the artery walls.  The phytonutrients Nasunin and Terpene relax the walls of blood vessels, causing better blood flow. The soluble fiber content of the eggplant reduces bile acids.  Your body then uses the cholesterol from your liver to make more acid, resulting in lower LDL.

Eggplant is naturally low in carbohydrates. Due to its low glycemic content, it aids in maintaining blood sugar levels for all people, especially those with diabetes.

Foods with a low glycemic index do not raise blood sugar levels as quickly as other foods that contain carbohydrates. For this reason, many nutritionists suggest adding eggplant to your regular diet if you have Type 2 Diabetes.

Eggplant health benefits don’t stop there. It is also naturally cholesterol free and has zero fat content.  A one-pound eggplant contains only 88 calories, 0.7 grams of fat, 21.1 grams of carbohydrate, 12.5 grams of fiber, and 3.7 grams of protein. If you leave the skin intact, the fiber count raises to 18.6 grams.  As a result, it is a filling food that will stay with an individual until the next meal.

Eggplant contains a fair amount of iron, about .2 mg per cup. Therefore, those with anemia due to iron deficiency will benefit from adding eggplant to their diets.  While more research is needed in this area, current studies show that those low in iron who consume eggplant increase the health of their red blood cells. This leads to better levels of energy and strength.

On the flip side, the phytonutrient Nasunin contained in eggplants acts as a chelating, or bonding, agent for excess iron, carrying it out of the blood stream.  For many men or post-menopausal women, excess iron accumulates in the arteries, increasing the production of free radicals. This in turn increases an individual’s risk for heart disease or many types of cancer.

The chelating process decreases the formation of free radicals in the blood stream, protecting the cells from damage that can cause cancer and can damage joints, leading to autoimmune diseases such as rheumatoid arthritis.

As with any food substance, an individual may have an allergy or sensitivity to a particular food and should certainly consider eliminating anything that causes such reactions.

TIP: When selecting an eggplant, give it a squeeze. It should feel firm and weighty with a shiny coat. Bruises, marks or soft spots indicate an overripe fruit. Click To Tweet

Eggplants are at their peak from August to October, though they are widely available in most areas throughout the year.

Eggplants vary a lot in their taste and texture. On their own, they are quite bitter tasting and spongy in texture. Prepared the right way, the eggplant can be a healthful, delightful addition to your fruit and vegetable regimen.